ICEY Apk Mega Mods + Data is a side-scrolling action game. As you follow the narrator’s omnipresent voice, you will see through ICEY’s eyes and learn the truth about her world. 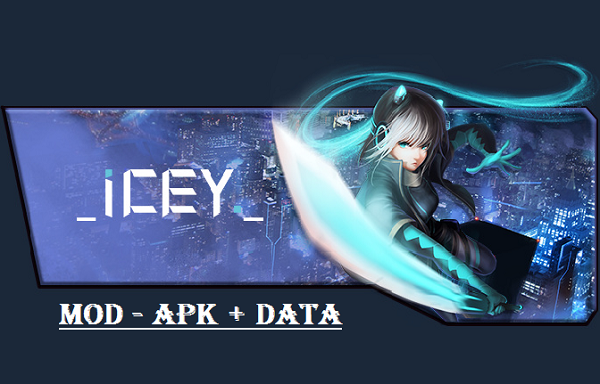 The game I got because of info from someone on the Facebook Fan Page that I created. Very rarely came / release a fun game lately. Lured is the right word when playing this game the first time. By a very exciting, simple gameplay, the graphics added “very” good. The character design remotely reminds me of a quartet character from Projeck Diva, Hatsune Miku. From the far green hair of ICEY, it looks like Miku’s hair.
A game that has fast fighting gameplay and stunning visual effects. But unfortunately this game has a narrator that sucks / funny. Who is ready to interrupt / entertain us during our adventure as ICEY. In my opinion, this is the best offline game that releases some of these months on android. (Do not protest, I think that means personal opinion / depends individual taste) Different people taste guys. _ ^
This game itself has a classic hack n slash genre, where we will move between areas from left to right or vice versa. It may be similar to Castlevania in NDS. During the journey, the player must slaughter all the enemies that appear. Must help it to continue the journey to the next chapter / area. Facing enemies in this game is very fun and challenging. Fun because of the quick character movements with visuals that I think are impressive. Challenging because there is an enemy boss in each chapter that will wait for the player.
Because I wear a non mod apk, sometimes several times killed by the boss before can beat it. Each enemy boss has a different look and size, and of course need different ways to beat them. Then, do not be fooled on the enemy bosses with a small size, because in addition to having the same blood bar with other bosses, the most agile movement. As a result more difficult on the opponent in the appeal of other bosses I’ve slaughtered in previous chapter, need a little patience and luck to beat him. The reason for not wearing apk mod is because the game as good as this is a pity if played with mod. Should still be enjoyed slowly hehehe. But still, I keep apk modnya kok. Mod or normal, depending on taste and possibly also circumstances. No Offense !!!
The controls take place comfortably in this game. Nothing is made of strange or unique that it feels strange and awkward when played. Virtual analog on the left will move ICEY, which is accompanied by four action buttons located on the right of the screen, so five if the player activates a skill. The key combination is needed to create a powerful and cool combo attack. And occasionally a dash at the right time to do a counter attack that is like a lightning attack at the weakest point of the enemy. Because except the boss, the average enemy will be killed immediately with counter attack.
Mod:
Mod apk -> Mod Money / Free Shoping
Mod apk v1 -> Mod Money, Unlimited EXP.
Mod apk v2 -> Mod Money, Unlimited EXP & God Mode
Instructions … !!!
– Download
– Extrak file “zip” it with winrar / zip (if no pc, friends can use android app by installing from >>> Play Store <<< or install file apknya with >>> Zarchiever Pro <<<)
– Install the game (just click the file “apk” in the file manager.)
Put data in Internal / android / obb / here guys (if there is no “CREATE” folder manually)