Terminator Genisys: Future War is a free-to-play mobile strategy game where the human Resistance is locked in a never-ending war with the machine army. Genisys is destroyed and Skynet is offline, but the future war is far from over. Engage in large-scale strategic warfare and rejoin the struggle between machine and man. Build your base, attack your enemies and pave the way to victory for your clan in tactical multiplayer. 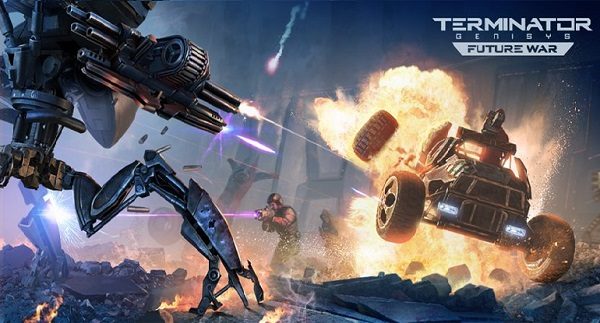 Plarium, developer of the hit titles Vikings: War of Clans and Throne: Kingdom at War, has created a deep strategy MMO in the Terminator universe. Set directly after the events of the film, Terminator Genisys: Future War offers players a chance to reset the future with addictive gameplay, constant action, and massive clan warfare.
With two different playable factions, you can choose to take the role of a Resistance Commander or the leader of Skynet’s Core, and either save the last of humanity or crush it under your cybernetic heel.
John Connor is MIA, and the Resistance is broken. As a human commander, it is up to you to rebuild humanity’s most determined military force, find and recruit survivors to your cause, and stop the machines from reactivating Skynet. Or you can betray humanity and convert yourself to join the machine regiments.
Would you rather play as an unstoppable killing machine? With Skynet’s primary core offline, your secondary protocols are clear. Construct factories, find lost battle schematics and terminate the human threat once and for all. If you feel sympathetic to the human cause, you can decide to reprogram yourself and fight alongside the Resistance.
Both sides are fighting for their lives and defeat is not an option. Arm yourself with futuristic tanks, relentless infantry and devastating weapons – and win the future war once and for all!
NOTE: Terminator Genisys: Future War is completely free to play, but some in-game items can be purchased for real money. You can switch off the in-game purchase option in device settings. You need an Internet connection to play this game.
GAME FEATURES
– FREE TO PLAY!
– Two playable factions, each with its own narrative, troops, buildings and upgrades!
– Intense PvP! Go on solo conquests or join a clan to dominate the map!
– Fight against powerful bosses in solo PvE or joint clan attacks!
– Unlock achievements for great rewards and bragging rights!
– Part of the official Terminator Genisys universe!
– Cutting-edge graphics!