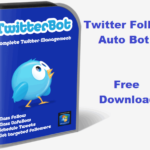 This is my Free Twitter follow bot that try’s to mimic human Behavior to reduce the footprints that are created by the bot, When you have the mimic human Behavior boxed checked the bot will randomly change it’s behavior by performing a series of random actions on the page before the follow buttons is clicked. […]